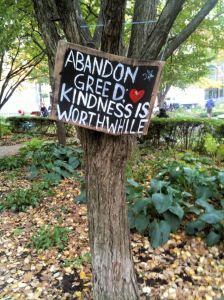 But when bumblebees threaten extinction on us we panic.

Because what’s big, ultimately, is expendable. It’s what’s very very small that matters, ecologically speaking; our world belongs to the bugs, the worms, and mold. We are visitors only, and while we like to look down on the rest of the planet because it could never have been Shakespeare (as if you or I were ever capable of being Shakespeare either–but I digress), the fact is, Shakespeare could never have been, could never have breathed nor eaten nor grown, without the bacteria, decomposers, insects, and photosynthesizers that made it all possible. Not to mention all of the, you know, actors and set designers and stuff.

Polar bears are very cool, don’t get me wrong, I want to live in a world with polar bears. But if polar bears were to go extinct tomorrow, their ecosystems would hobble along until a new status quo establishes itself. Whereas if plankton disappear (and they might), every aquatic ecosystem on earth is toast.

I went down to Occupy Toronto at St. James Park last Saturday, just as they were setting up the tents and tarps. A sign reading “Abandon Greed, Kindness is Worthwhile” greeted me and stuck a goofy grin on my face that stayed all afternoon. People were smiling, friendly, laughing, playing guitars and singing in a rainy 10C. Two mics let people give short speeches to the crowds, and the diversity of speakers and opinions was heartening and lovely. Buy local! Find the love within! Let go of fear! Do God’s work and help the poor! Tax corporations! Remember we are already on occupied land; native rights are important too! Health care for all! Forgive student debts! Build wind and solar! Solve climate change! Stop pollution! Racism kills! Listen to my hip-hop song about the revolution! There’s flouride in the water! Stop buying crap!

Disorganized, yes, but my activist heart sings because all of these conversations ARE related and important and we’ve needed these disparate communities to sit down and talk to each other about how they’re related and how to fix it for at least fifty years. The same system that gives banks millions of dollars for depriving average folks of education and a home, while doing nothing to help those average people, is the same system that gives corporations inalienable rights to destroy the atmosphere and climate upon which human civilization depends. The same mechanisms that send some kids to Harvard and Yale send other kids to the army or jail. That 1% on top doesn’t just depend on corrupt government (but hey, it doesn’t hurt); it also depends on sexism, racism, environmental degradation and externalities, cheap foreign labour and globalization, debt slavery, fossil fuels, and, yes, the internalized terror that keeps most of us from doing more than making a largely futile x on a piece of paper every four or five years. (“Why don’t you just vote!” the columnists scold. “Has it occured to you that we’ve tried that and it hasn’t worked out particularly well!” we reply.) It’s all related. No meaningful solutions will come until all sides have come together and discussed the common sources of their problems.

As with ecology, so with the economy: the big need the small. The charismatic carnivores of the economic system–billionaires, millionaires, banks, and in a global sense much of the first world–intimately rely on and cannot function without the producers and decomposers–mothers, teachers, janitors, manufacturers of clothing, farmers, plumbers, etc. The charismatic carnivores have done a pretty good job of convincing the rest of us that we need them–their money, their ‘jobs,’ their ‘investments,’ their continued presence gracing our lucky countries–but nothing could be further from the truth. They need us.

If every CEO on earth vanished tomorrow, how would it affect your life? Now imagine a world tomorrow without waste collectors, truck drivers and electricians. Our society could not function. The 2009 garbage strike in Toronto brought the city to its knees.

Generally speaking, your contribution to society is in inverse relationhip to the size of your paycheque. If, as a mother, your paycheque is $0, congratulations: you are truly indispensable and will, as a partial reward, spend your lifetime hearing about how your personal choice should in no way affect anyone else’s tax share and, by the way, please keep the brats out of any restaurant where you order at a table from a menu.

Every so often, literal charismatic carnivores wipe out the underpinnings of their own species by devouring their prey to near extirpation. The prey population collapses, then the predator population collapses, then both rebound, and balance is restored. Again, as with ecology, so with the economy: every so often the charismatic carnivores devour the underpinnings of their prosperity by pushing the working class to the point of collapse; but human beings, being human, generally respond by fighting back and swiping a few fangs from the carnivores’ mouths. And you get slave revolts. Class warfare. The civil rights movement. Feminism. The anarchist rebellion in Spain. The Magna Carta. The American Revolution. The Arab Spring. You get Occupy Wall Street and its many, many derivatives. Whenever the very small (economically speaking) remember that the rich need us, but we don’t need them.**

Just like bears need bumblebees, but bumblebees could manage just fine without the bears.

* Please note that all of these species are still facing extinction. We’ve been enormously unsuccessful at rescuing our victims.

**Not a plea for the extinction of the rich, just for a little mutual perspective and humility.