Last fall, as I believe I’ve mentioned, was pretty rough. Rough enough that whenever I was home by myself the only thing I wanted to do was sew.

A developing (and possibly transient–huzzah!) thyroid problem had me so exhausted every night that the ten hours of sleep I was getting just wasn’t enough, so more energetic pursuits were out of the question. The same thyroid problem was making it difficult to read, because it was affecting my eyes’ ability to focus. Even now it’s pretty tough and by the end of a work day they are getting awfully tired. Add to this some non-specific and non-trivial stressors, and you had an Andrea in pretty dire need of some serious distraction, with no energy to leave the house. Enter the Distraction Projects #1-11, a bunch of sewing patterns ordered online with fabrics new and old that I was determined to sew–one of the more fabulous things about sewing, for me, being that it is completely absorbing and crowds out the ruminations, can be abandoned mid-way without damage, doesn’t use the same parts of one’s brain as most office work does so it is restful, and at the end of it, you’ve got something nifty to show for it (or at least a few new lessons learned).

This tunic was one of the first. Something easy and drapey that could potentially be worn with leggings or skinny jeans. I picked out some slightly stretchy fake suede in a vibrant cobalt blue at $5/metre (cheap!) for the test garment, and ta-da! Here it is.

It’s unforgivably goofy of me, but I couldn’t resist copying the pattern envelope pose. She is wearing more eye make-up than I own, and she clearly has seen more sun than I have in the past … well, ever. But I did try.

Anyway, the pattern worked. I should have checked the ease of the garment before picking the size, because at first it gave me a distinctly wearing-my-grandfather’s-pajamas vibe, but I nipped it in a fair bit at the waist and it is now much less tent-like, and still roomy enough to spend a weekend day in. Which is good, because previously I had one shirt that I wore almost every weekend day in the winter, as it was the only non-scratchy comfy and warm shirt that I owned. This shirt has doubled my weekend shirt-wear options. Not bad for a $3 pattern and $7.50 worth of fabric (plus thread).

Which meant that it was time to apply the sizing lessons to another version, this time in a lovely Liberty of London cotton lawn in grey with flowers, to wear with those confounded red skinny jeans. The sleeves are a bit shorter, the neckline is a bit higher, and a few small stitches above the button to keep it from gaping have made it perfectly work appropriate. And it is so comfy.

In both versions I left the epaulets off the arms. I don’t understand epaulets, frankly. For those days when you are suddenly hit by the need to shorten your sleeves, and don’t want to just roll them up? Whatever.

No epaulets. Two finished shirts. One pattern. Super easy. If you decide to make this one, though, take your time with the stitches where the collar slides inside the shirt front, beneath the button. It’s easy to get it a bit more gathered than it should be, as you can see by the bit of puckering on the blue version. 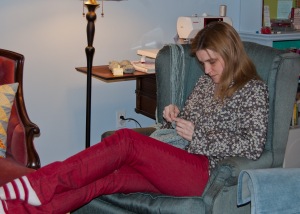