I decided to make this one in the midst of Fabricland’s annual December members’ sale, but wouldn’t you know it, I couldn’t find a jersey that seemed meant for this dress: too patterned, too poly, too thick, too sheer, too whatever. I ended up settling on this bright pink poly/rayon jersey. It is unbelievably soft; it is as comfortable as a t-shirt; it  is probably not meant for a dress. But who cares. It cost $6/metre and bought three, so plus the zipper this is about a $20 dress. I made it up just in time to wear to Christmas dinner with a friend and her lovely parents, and have worn it several times since, because it meets that cardinal rule of dresses in wintertime: snuggliness. 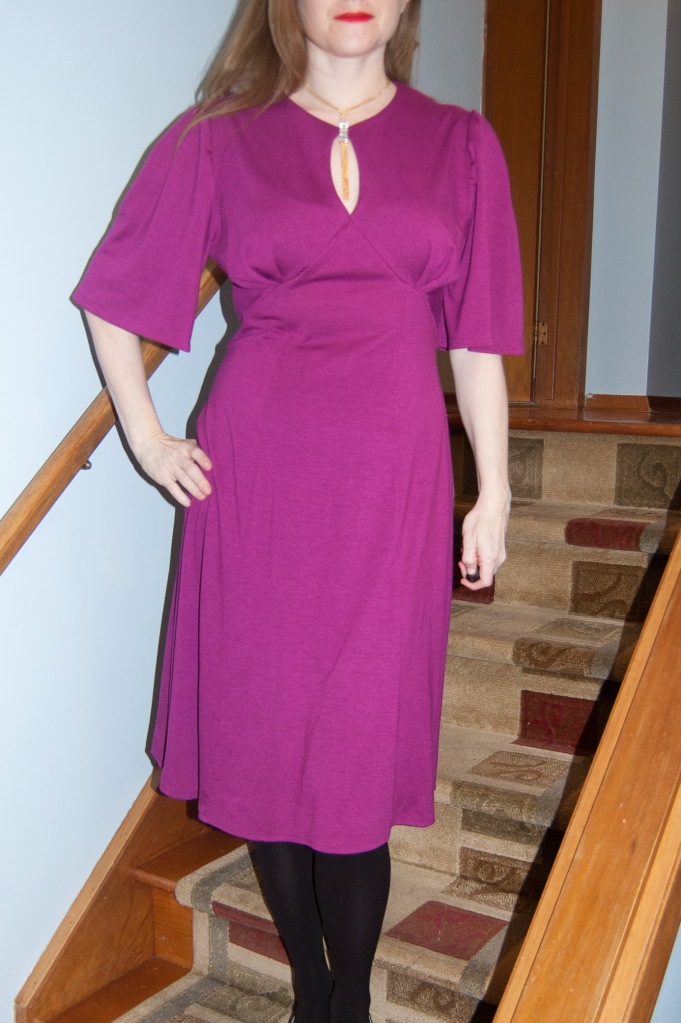 The pattern itself is awesome:

Keyhole slit, slanted waistline, gores in the skirt, pleats in the bodice, and fancy bell sleeves to capitalize on our current Sleeves Moment.

Before making it up I shortened that keyhole slit: bizarrely short upper torso necessitates these kinds of machinations unless I want to put my underwear on display which, despite the Accidentally Underdressed posts, I really don’t. Even so I need to be careful with my underwear choices in this one.

After making it up I realized that I need to take some height and width out of the centre back and back neckline seams, which is pretty standard for me. But long hair=No One Can Tell, or so I say to myself. I also hemmed the sleeves more than the pattern said to so it would hit at my elbows, thanks to bizarrely short arms.

It’s almost entirely serged. The bodice is lined; for this version, I self-lined. I wouldn’t do that again, since the pleats x 2 make for a thick join at the front waistline.

The sleeve cap is pleated too, which is hard to see in these pictures or in the line drawing. Take my word for it: it’s cute.

You’re supposed to do a button-and-loop closure at the top of the keyhole slit but I just sewed it shut. The dress has a zipper up the back, for goodness’ sake; a functional button closure is not required.

Having liked the first one so much, I had to make it again.

Hush. That’s how it works.

I altered the pattern to take out the excess width in the back, and lowered the back neckline by about an inch and a half. And then I went shopping.

Not intentionally, actually. I had to bring my coverstitch machine into the shop (… yes it did take me that long) and saw that the fabric shop across the street from the sewing machine store had a “CLOSING BY JANUARY 31!” sign along with “70% off lowest marked price for everything in the store!” This was the one shop on Ottawa Street where they sold really, really, really nice stuff. The kind of stuff that can cost over $100/yard so you go in, pet it reverently, and then leave quietly so as not to mark or damage anything.

I went in. It had been pretty picked over, but in addition to six yards of silk picked up for $35 including taxes (!!!!!), I found a plum poly jersey with a super sparkly gold lurex weave, marked down to about $3.50/yard. Two yards of fabric plus one metre of cheap polyester lining plus a zipper comes to a grand total of about $13 for the whole dress. And yes, this was the first of the Lurex Trend to be completed. It’s very sparkly. In some lights it’s more gold than purple.

Sewing your own clothes doesn’t always save you money, but holy hell that’s less than the price of a trade paperback.

Anyway. It’s a very, very light jersey–so light I took it home and discovered it’s almost transparent with the light behind it–and I used wisperlite (their spelling, not mine) lining which, incidentally, is both very very light and sheer and woven so tightly my regular machine needles did not want to puncture it for love or money. This increased the frustration factor, but also made it much easier to pleat the bodice as both together were about the thickness of a regular jersey. Because the fabric was so sheer I had to draft a lining for the skirt. Because it’s jersey and so light, and because I didn’t want to have a topstitch or even a blind stitch hem to break that lovely sparkle, I just left the hems raw. And again the keyhole was sewn shut.

The one bit of advice I have for anyone making this up at home is to baste the front bodice pieces to the skirt before serging. Both times now the machine has struggled to gain purchase on all those layers at the middle front and so one piece has ended up skewed, necessitating fancy hand sewing after the fact to make it line up properly. Can’t tell now but it was a bit annoying at the time.

So now I have two versions of the same dress: one soft, snuggly, and work-appropriate, and the other sparkly and suitable for dancing. Both dirt cheap.