I think we’re all still here.

If not, this is a weird and frankly crappy version of an afterlife.

It’s an odd observation, I’ll grant you, but after this year we’ve had, even finding out that I’m actually dead and this is life beyond the grave would not surprise me.

How about you? Do you greet each day now with a “what fresh hell is this?” Do you log on to the internet braced for news of catastrophes? Do you find yourself sitting with friends in stunned silence from time to time, asking each other, “That happened, right? That was real?”

Look, if you’d gone back two years and told me that one day, I would be grateful every time the American president failed to start a nuclear war with North Korea via twitter, I would have thought you were smoking something.

But here we are, and this is a daily reality, as reported on in the press.

Does the GOP have a spine?

If so, where did they put it, and can they find it in time to prevent the destruction of all life on earth?

If not, can one be found for them? How?

North America experienced three historically unprecedented hurricanes and forest fires all over, so how is it we keep talking about climate change as something that’s going to affect us “one day?” Is today the “one day” people are talking about? Because that’s some serious and scary shit and people used to say that we’d take climate change seriously when it started affecting us and killing wealthy people in first world countries and here we are and no one seems to be taking it very seriously. Which I personally don’t find surprising, but when I said this previously, people called me a pessimist and a Cassandra. Yet here we are.

How many men who have been held up as cultural icons for decades are we going to learn have been preying on women in not-so-secrecy?

When will this (painful, potentially genital) rash of disclosures end?

When it does, how many people are going to try to shove us back in the box of “it’s not that bad” and “but why didn’t you come forward before” and “it was just a misunderstanding” and “really if you don’t want a superior at work to lock you in an office and show you his penis you should be swaddling yourself head to foot with three layers of chenille blankets every day”?

Will it work? Or is this something new?

If it is new, when is going to trickle down to those of us with predators and abusers who are not famous? Because there are absolutely some men in my history who should be in jail and aren’t, and no way no how do I yet feel like I could come forward with those stories and expect anything but excoriation and grief.

And the whole Russia thing is super weird, yes?

Are we sure that isn’t just a le Carre spy novel?

I mean, does it seem credible? Would you have gone to see a movie with that plotline, two years ago?

Strutting around in public with their faces showing giving Hitler salutes?

In America, in Europe, here in Canada?

Oh plus “I’m not a Nazi” Nazis. “Alt-right” Nazis. “Proud Boy” Nazis. “Nazi sympathizer” Nazis. I’m so glad we’ve found so many creative ways to make Nazis feel less judged about being Nazis. Meanwhile using the preferred pronouns of trans people is, apparently, an assault on freedom of speech. Because it’s good to make Nazis feel comfortable but extending the same courtesy to transgender children is special snowflake SJW ridiculousness, or somesuch.

Will I feel better if I drink more tea?

Was it just not enough tea yet?

Not everything is global doom and gloom.

(It just feels like it too much of the time.)

For instance, we got a (knock on wood) diagnosis for Frances.

Prenatal ultrasounds showed something was up with her bones; and here we are, 14 years later, knowing which funky gene is to blame.

It is a newly identified mutation and Frances is the ninth person in the history of humanity to be identified with it.

This is, perhaps you can imagine, really Big News. I’m still a bit wary of it. That particular rug, the “we’re for sure this time really certain about what’s up with Frances” rug, has been pulled out from under our feet many times. So I’ll believe it fully when the study is published next year and an anonymized Frances is indeed in it and I can see it all for myself. Frances, however, feels much better knowing what’s up, and that is good.

She’s taken to highschool like she was born to it, mastering the hallways and lockers and increased expectations and social demands like a pro. She’s kicking ass and taking names in art and languages, with a midterm 97% in French, as I expected; she is loved by her teachers and her friends, which of course. But it feels like a gift. The school is committed to inclusion and human rights and it is reflected in the way they’ve approach accessibility for her, and what a difference it’s made.

Good things happened this year, but I suspect that in years to come what I’ll mostly remember about 2017 is the constant daily unending stream of global yuck.

But hey, it’s January and we’re all still here.

(Acknowledging that “we” leaves out a lot: the fortheloveofgod American refugees showing up at the Canadian border, the ones Trump deported or who were never able to arrive at their destination, the diabetic guy who died for want of insulin after he aged off of his parent’s insurance, the victims of gun violence, the Rohingya, those displaced by natural disasters–all those who aren’t where they used to be, aren’t where they were allowed to be, or aren’t anywhere at all anymore. That “we” is a pretty lucky group, the ones who are still “here.” So.)

I have no resolutions. No magic words. I want 2018 to be a year worth living, and I have some ideas of how to make that happen for me and for my girl and how we can do our bit for the wider world. If it ever becomes specific or tangible, it may turn into a blog post.

For sewing, I swore up and down that I wasn’t going to do #2018makenine, but then not only did I do a plan, I did a Plan, complete with drawings, paints, and ink pencils. Sometime in November I’ll look it up and I full anticipate to be posting a #2018madetwo around this time next year. 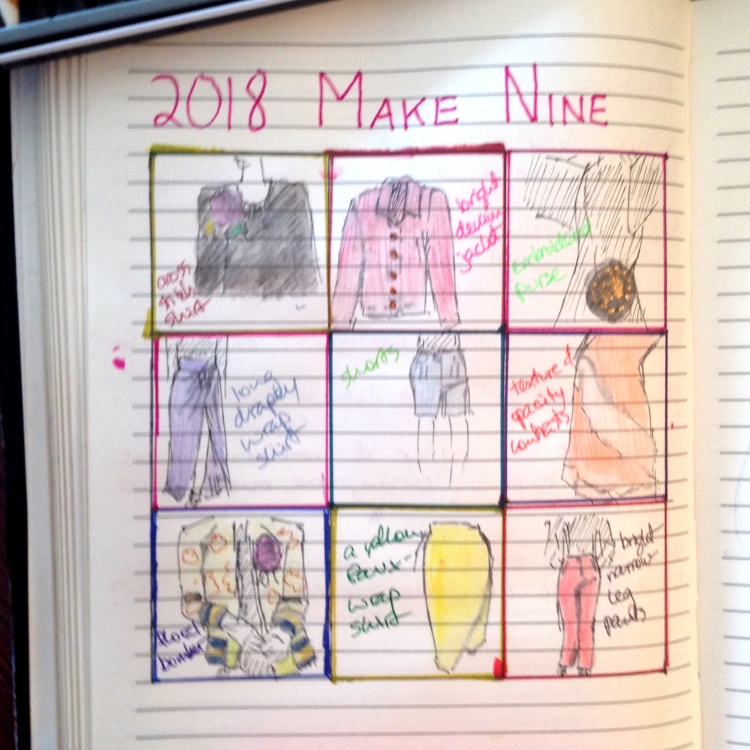 I spent all day Jan 1 tracing and cutting out patterns; needless to say, not one of them is in that drawing.

I wish you all your very own Happy New Year–a 2018 served up on a bed of thornless roses, which you can look back on with some contentment in future years.