There are two things I’ve been trying for a few years now to add to my work wardrobe: yellow pants and pale pink pants. Something like these: 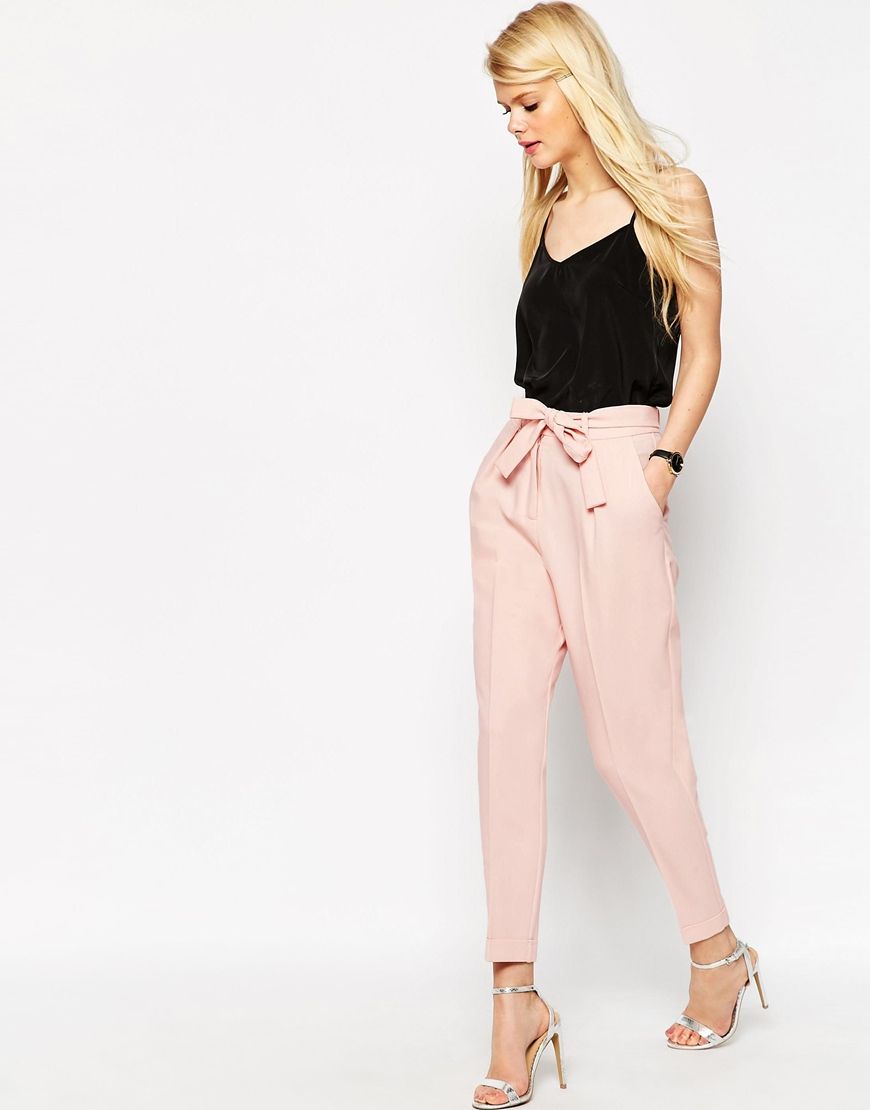 The yellow ones haven’t happened because I wasn’t able to find a bottom-weight fabric in a shade of yellow I like, but I finally did recently and hope to have those sewn up over the summer.

The pink ones haven’t happened because I keep buying bottom-weight pink fabric in a shade of pink I like and then trying to make them up into trousers with slash hip pockets, and then hating them. I’ve made four initial pairs; one of them is wearable, sort of, and one of them is good, and two of them are garbage.

This possibly represents an excessive dedication to pink slash-pocket work pants, but I think I can finally put it behind me. The fifth one is, I think, good.

I tried trouser patterns with slash pockets by Vogue, Burda and Patrones. And they have all sucked. Not because the patterns themselves were terrible–well, with the Vogue pattern, it was terrible also–but because slash hip pockets are the absolute worst. Two of these tries (Vogue & Patrones) were with pink fabrics that I had high hopes for; one of them (the Vogue) is an absolute wadder, and the first try of the Patrones was ok … but just ok. And that’s after a whole lot of alteration.

These pants are a second try of the Patrones, with the back modified based on my StyleArc Katherine pants (as I know it fits); two inches added to the length, waist raised an inch all around and more at the centre back, pocket shape redrawn, and a lining drafted and inserted.

There’s a tl/dr at the bottom for anyone who can’t wade through all these details. I don’t blame you, either.

The pockets always gaped. Just a little, but enough to annoy. And then of course being storebought pants, if the hips fit the waist was too loose, and if the waist fit the hips were too tight. Once I started sewing my own pants, I rarely wore them, and they were the first work pants I gave away.

But that’s ok because I could totally fix this by sewing them myself, right?

Back in the early days of my sewing journey, I downloaded a Burda pdf pattern of a high-waisted pair of pants with hip slash pockets. I had such high hopes for them–they looked great in the magazine–but on me it was an utter disaster. Everything was too big. This was before I understood that I needed to size down by one in Burda, and I’d also chosen a fabric with way too much body, so they looked like big puffy clown pants. With gaping pockets.

With the combination of poor size selection and poor fabric selection, it’s possible that I would have had more success if I tried again. But I’ve since discovered I really dislike pdf patterns, so for me, this is not an option.

I traced out and tried a pair of pink ponte pants from a recent-ish Burda, and they were ok, but the waist is too big to be really functional if I’m going to put my insulin pump in the pockets (it’s just heavy enough to pull them down just enough to not look right). Plus I kind of botched the top-stitching around the pockets. So I wear them on weekends sometimes, but that’s it.

I first made these up in a lightweight grey wool, a few years ago, before I understood that I can’t actually make up any Vogue patterns without measuring the pattern tissue to determine the actual ease/fit. At the time, I liked them and wore them a lot, but in retrospect the fit was pretty shit. And the pockets gaped.

Last year, I tried to use the proper size to make a pair of pale pink pants, and they were still shit. This is when I learned my first important lessons about pants with hip-slash pockets:

The fit is critical. It needs to be perfect.

This was as far as I got with this first pair of pink pants. Dear Readers, the pocket opening sat straight up and down on my hips. They were practically a semi-circle seen straight on. I felt like I was carrying Dumbo ears around on my butt. I opened up the pants, tore out the pockets, re-drafted and recut pockets with more of an angle so they would sit on the front, and it helped, but not enough to make them salvageable. Ultimately, I discovered that for myself, if a hip slash pocket is to start at the bottom at the centre of the body and end a few inches forward at the waist, I need the back pieces to be bigger and the front pieces to be smaller, and with this Vogue pattern, the front pieces were bigger–the centre side seam ran down the leg towards the back by an inch or two. The pockets were never going to sit where they should.

At this point I abandoned this pants pattern permanently. Nothing is worth this much work for so little reward.

After my first pants experience with them, I figured this would give me a better starting point.

And it did. I traced off the size given for my body measurements and the pattern tissue added up in hopeful ways. I made the front pattern piece 1/2″ smaller and the back 1/2″ bigger. I angled the pocket more inward so it wouldn’t sit right on the hips. I used fusible interfacing on the bias edge of the pocket opening to stop it front stretching out. And I cut it out and sewed it up in another cut of pale pink bottom-weight fabric.

And the pockets gaped.

It was better than the Vogue pants–way better, an order of magnitude better–but it still needed a lot of work. The waist fit just right. The full hips were fine. But in between was a bit of a mess. So further learning on hip slash pockets:

Round hips are a problem. I have round hips, meaning that there is a substantial difference–over 5″–between my high hip measurement and my waist, and it’s all sitting on the back. This pulls the back of the pants backward and forces the pockets open. The solution to this is extra ease in the back of the pants over the fullness of the hips–i.e., rounded darts as opposed to straight. (The sign for this was a side seam that ran perfectly perpendicular and straight down the middle of my leg from the floor to the full hip line, and then curved toward the back between the pocket opening and the waist.) So I redid the back darts, and then the line ran straight down. But the pockets still gaped. Not much. It was way better, but they did not lie flat or stay closed. I opened up the side seam a bit to provide a bit more ease through the hips, and they still gaped, but now with extra puffiness at the hips.

This final version is the Patrones pants front, with the reduction mentioned above.  But also:

It was a lot of work. It worked, but it took a fair bit of time.

The back pattern piece is my modified StyleArc Katherine from the full hip to the waist; from there down it’s the Patrones pattern.

I used Liberty cotton lawn scraps to line the pockets and the waistband. I find using a non-stretch woven on the inner waistband of a stretch-woven pant helps keep the waist from bagging out, so it fits better and stays in place with wear. There are bar-tacks at the pockets top and bottom about 3/4″ from the side/waist seams respectively to hold it a bit flatter.

And I’m never sure I’m ever going to want to put myself through this process again.

All of the pants patterns I like, make more than once and enjoy wearing have horizontal pockets of some kind. It’s time to just learn this lesson once and for all for me: no more hip slash pockets!

You need just enough ease so the front and back aren’t pulling apart, and pulling open the pocket.

You need not so much ease that excess fabric is pushing the pant away from the body.

You need the side seam to run exactly down the centre of your leg, so that the pocket opening doesn’t sit right on what should be the seam line. This may mean using different pattern sizes for front and back pieces, depending on where you want that seam to sit.

You need to reinforce the pocket opening in some way to stop it from stretching out.

The darts on the back need to take your shape into account. Fit needs to be perfect from the waist through to the bottom of the pocket opening. If the back is snugger than the front anywhere in there, it will pull back, forcing the pocket open. For me, I needed to alter a straight dart into a curved one.

Ideally the pocket pieces will run from the side seam to the fly, to help prevent that from happening–but many don’t, and even if they do, that won’t be enough to solve a gaping pocket on its own.

You cannot take the waist in at the sides if what you’ve cut turns out to be too big for you, so it is important to make sure that the waist will fit before you cut out the pieces and assemble the pockets. After that, it’s too late to change (at least, without many hours of work). Measure the waistband, measure the top of the front and back pieces and the visible pocket opening, and if you can tell it’s going to be too big–alter that first. See where the top of the hip slash will hit wrt the side seam.

And good luck. They don’t work for me, but maybe this will help someone else.

7 thoughts on “Pink Avalanche #5, in which I hate slash hip pockets”