This may be of interest to three people, all of whom know the answer already, but just in case: as a T1 diabetic with an insulin pump who likes to go out dancing in dresses without pump-friendly pockets, What To Do With The Pump is a real question.

Actually, What To Do With The Pump is a question to be answered every day, but some situations are more challenging than others. You need to keep it attached to you somehow, within the distance of the tubing.

And I have two answers: one for narrow skirts, and one for wide.

For those of you who aren’t familiar with them, my insulin pump is about the size of my palm and weighs slightly more than my cell phone. It has a tube about 18″ long that connects to a catheter  in my hips or abdomen, about 1cm long, that moves every few days to prevent scarring. It keeps me alive, so I’m fond of it, but little puts a damper on a dance experience–or other experience, for that matter–like finding your artificial pancreas on your shoe.

It can’t stray too far from my waist–the tube isn’t long enough. Regular skirt pockets aren’t sturdy enough to hold something this heavy (though pants pockets work fine) and it’s tricky with the tubing anyway. I keep telling myself that the next time I make a dress or skirt from something sturdy with pockets I’m going to add a buttonhole inside the pocket to feed tubing through so I can use it for the pump, but I haven’t tried that yet.

In the meantime, I make what I call pump holsters.

With a narrow skirt, I’m just worried about keeping the pump in place, strapped to my leg.

I used to buy the holsters made by pump companies, but they never were quite right. They were almost always too loose, and even when they were tight enough, they’d slide down just with walking. The expansion and contraction of the leg muscles would work them down from upper thigh to knee in pretty short order, and the holster fabric tended to be slippery, which didn’t help. Many days I would pull the holster up five times in ten minutes, and then give up, and walk to work or wherever awkwardly clutching the holster through my skirt to prevent it from slipping any more.

So I bought the kind of stretchy nylon you’re meant to make supportive undergarments with in beige, and a couple of metres of sticky elastic.

I cut just over double the width of the pump, and the length is a bit less than the circumference of my thigh. I sewed the narrow ends together, and on one half, I sewed by hand using a cross-stitch two lengths of sticky elastic.

Then I folded it in half width wide, sewed a pocket into it, and sewed the two raw edges together except for the pocket edges.

It’s just the right size, and the sticky elastic helps keep it from slipping down. I can position it however it makes sense, and it stays nicely in place through a whole night of dancing (or a whole day in the office). 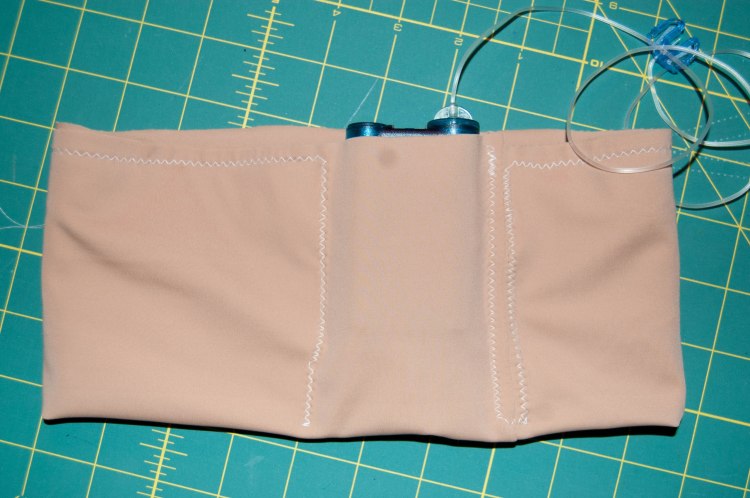 Wide Skirts have the insulin pump problem, and the underwear problem: when you spin, the skirt flies up. I can handle a bit of accidental flashing. But I prefer there to be a point to wearing the skirt, in that at least my underwear is covered more often than not. With a lot of spinning in a wide skirt, you can’t count on it.

I used McCall 6173 for this, as it’s a very basic leggings pattern with only one seam in the legs. I raised the waist by about 1-2″, and folded the fabric at about the spot on the legs that would give just enough length for the pump. This makes no sense at all. Here are some pictures:

See? They’re shortened, but not just shortened, because there’s a spot in the legs where you’re meant to fold them up to make a pocket.

I then assembled them per instructions, and folded the legs up on the inside, and sewed in pockets on the inner thigh, much as I did in the pump holster, above.

Added the elastic waistband, and voila: a functional pair of something like bike shorts that has a pocket on the inner thigh on both legs just big enough for an insulin pump.

It works beautifully. Exhibit A:

You can’t imagine how glad I was to have been wearing the yellow pair on the day I found out I’d been photographed by the local paper dancing at the Pier. Otherwise, my colleague’s question wouldn’t have been, “Andrea, was it you I saw dancing in the yellow dress in the newspaper?” It would have been, “Andrea, was it your underwear I saw dancing in the newspaper?” Which from a friend, mortifying; from a colleague … NO no no no nono.

It did a fantastic job holding the insulin pump, too.

I have a white, black, and yellow pair, and will likely expand as wardrobe dictates. And very likely wear them to work in the winter, because the regular pump holster is not as grippy on tights; I think these might work better. The white and yellow are made from a regular poly jersey: cheap, but not particularly breathable, which is an issue, but not as much of an issue as either misplacing my pancreas or displaying my undies for any journalists in the vicinity. The black pair is made from an athletic, wicking spandex, and is accordingly more comfortable.

The first holster is self-drafted. Just use a tape measure and you can make a good size for you.

The second is based on M6173. According to my body measurements and the BMV sizing chart, I should be a size Large. I made up a size Medium, took it in a bit, and it is in no way too tight for the purpose.  Any leggings or bike shorts pattern would do, though. There’s no magic to this one.