I have been sewing–slowly–but not many new patterns, and I’m not someone who likes to review patterns I’ve already reviewed unless I did something substantially different. And there’s not a whole lot of gaps in my wardrobe to fill right now, so not much need to sew.

One thing I have been trying to make more of lately is pants for work, hence these: 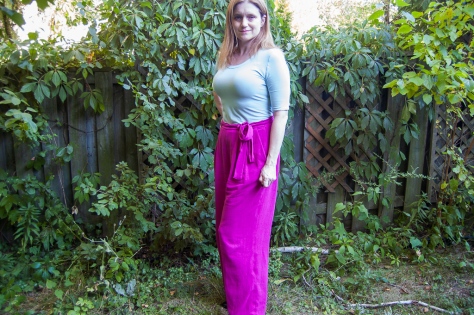 They are swishy, they are magenta, they are linen/rayon. In the magazine they made them up in cashmere, but I thought it best to try it out in something a little less expensive (but still wearable) first. This is the second pair I made; the first version, in rayon twill, is just a smidge too stiff for the pleats. Also, since the pattern has a belt, I made the whole thing up in a size 40 thinking I could just cinch it in. And I can, but it doesn’t look right or feel right with everything hanging from the waist tie, so I don’t recommend that. The twill pants I do still wear, but not as much as I would have liked to.

The linen/rayon blend is much drapier, and I cinched in the waist by about an inch on this version, so it can actually stay up on its own without hanging off the belt, and that helps. The linen/rayon is from Needlework; the magenta was pretty popular and went fast but I think this was the only cut to end up as pants.

The pattern goes together well; it’s a side zipper rather than a fly, so it’s not time consuming, as pants patterns go. I stabilized the pocket edges with selvedge from a scrap of pink poly chiffon, so it is both very thin and very stable. And I did my now-standard buttonhole-on-the-inside-of-the-pocket trick to make it more functional to wear with an insulin pump.

They’re … not slimming. That would be my one cautionary note, if it matters to you. Otherwise it’s a good pants pattern that makes work-appropriate and comfortable pants with a few fun details. I’m not sure if I’ll use my cashmere on these (are they too trendy? Will the pleats and bow be unwearable in a year or two?) but I enjoyed making these ones.

In Burda, according to the their body measurement chart, I should be making pants up in a size 40/42. For the first pair, I made a straight size 40, which was too big in the waist. For the second pair, I made a 38/40; this is my usual Burda size, and it fit just fine. 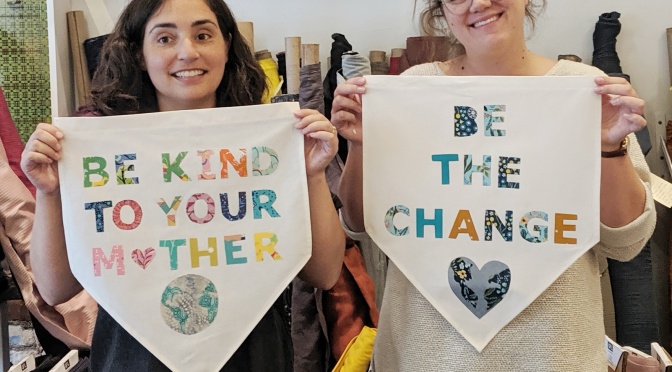 I’ve done something a bit mad, and I’ll talk about why I’ve done this to myself more in another post, but for today I’ll just tell you what it is:

I’ve committed to creating, hosting or participating in one public Climate Change event connected to each of my hobbies, ideally before the Canadian election in October but if that can’t be arranged ASAP.

Sewing was first: two small workshops held at Needlework here in Hamilton, using scrap fabrics to make small climate action banners and support the youth strikers, while I spoke a bit about what the climate emergency is and how it connects to our much loved hobby.

I’ve put it all together in this post as a toolkit that you can take to your favourite local sewing space and do yourself (or with a friend!).

I absolutely did not have this well thought out to begin with: I just went to my favourite local fabric store with a hugely sketchy pitch:

With the climate crisis being so much in the news, and the UN climate conference coming up again, and a federal election being faught over the carbon tax–and with Greta Thunberg and the youth strikers asking for adult support and participation in the Sept 20 and 27 climate strikes–wouldn’t it be great if an unexpected community like crafters and sewers were to speak out in support of climate action? We could fabric scraps, I suggested, and maybe piece them into a banner for the shop window or the protests–or people could make their own–or iron slogans on t-shirts, or make tote bags–or, I don’t know, what do you think?

Fortunately Kate and Liz were super enthusiastic and supportive and had the much better and easier idea of using fusible web to make banners, but yes, out of scraps. And I’d talk a bit about climate change while we all make our masterpieces, and we’d raise some money for a local environmental group, and in short, it would be fabulous. Liz and Kate did most of the work: making the blank banners, setting up the event on their website, and collecting donations. (A huge thank you again!)

After everyone arrived, Liz and Kate gave a basic introduction to the event and a how-to on the fusible web. Attendees brainstormed a slogan, sketched it out, and started tracing and cutting. About an hour in, after everyone had their slogan planned out and was focused on getting it done, I jumped into my talk.

It was very short–just a few minutes–and we were all working on our projects at the same time, so it was very informal.

Afterwards we kept chatting while we finished up our banners.

If we want to be reasonably sure that the planet can continue to support human civilization in something mostly like what we’re used to, we need to limit total warming to 1.5C.

We’ve already experienced 1C of warming, so there is very little margin left, and the global carbon cycle is so slow that what we’ve already emitted will get us to 1.5C some time this century whether we continue to emit carbon or not.

That sounds bad, yes? So when global leaders met and signed the Paris Accords saying they would try to limit warming to 1.5C, it led straight away to the question: ok, great, but how?

The IPCC commissioned a study on that question: how do we do this? CAN we do this? And about a thousand climate experts from around the world collaborated on putting together the information that came together in last October’s report. What they concluded was:

We have about a 66% chance of keeping warming to 1.5C, though we may overshoot it for part of that time before negative emissions have an impact.

That twelve years is how long we have to cut our emissions in half. Of course right now emissions are still rising, so that’s a big challenge.

AND! It will affect our beloved hobby, too. Let’s talk a little bit about how: we’re sitting in a space where just about every product started out as a plant on a farm, and which will be affected by a changing climate. Textiles and fashion have environmental implications beyond climate of course, like water use and transportation and fertilizers and chemicals during processing and dyeing, but I’m going to limit myself to climate impacts today because that’s what we’re here for. 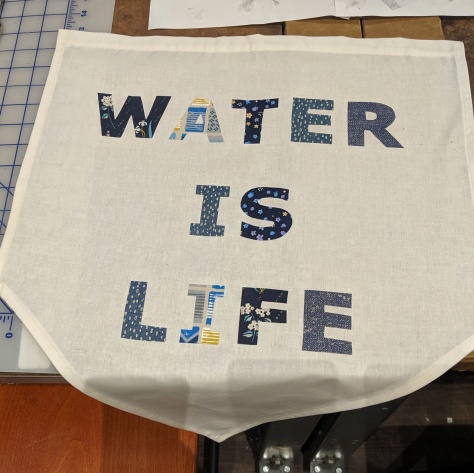 Not as much research or writing, but yields are declining for now and expected to continue to decline; however, not as severely as cotton (because it uses the entire plant, not just the seed?)

A single polyester t-shirt has carbon emissions of 5.5kg, (about double that of a cotton t-shirt).

We also have a solution here too. There are definitely sustainability concerns with the production of rayon, but bamboo was described by Project Drawdown as having significant potential to sequester carbon because it’s a perennial plant that grows very quickly. 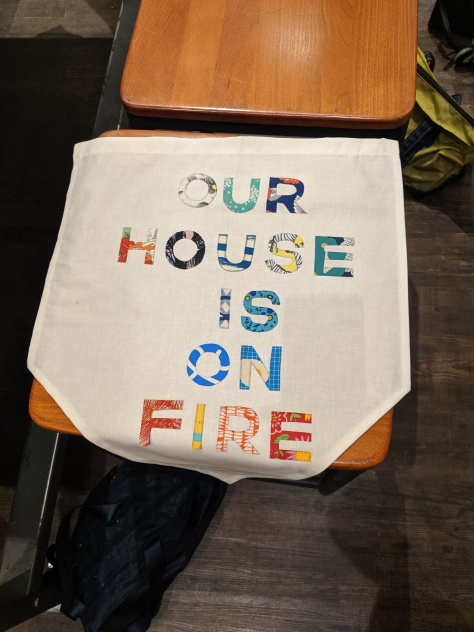 So there you go. Everything in the world, including this shop, affects and is affected by the climate crisis.

And of course, it’s not just textiles, is it? If it were, we might be less concerned, though I personally have no interest in living in a global nudist colony.

Reports on climate impacts expected for Hamilton this century include: more extreme weather events, more precipitation in the spring, winter and fall; more drought in the summer; more ice storms; more extreme heat, leading to an anticipated 2 months or more of extreme heat every year by the 2080s ; more invasive species; new pests and diseases to our region (like Lyme disease).

At the same time, these impacts are going to be worse for vulnerable and marginalized communities: women, racial minorities, people with low-incomes or disabilities, are all going to feel the effects more.

But this also means that just about anything you do to make the world a better, fairer place will help on climate change. For example, the same people at Project Drawdown found that if you combine the mitigation impacts of education for girls globally and improved access to family planning, women’s rights have as much impact on climate change as wind turbines.

You’ve probably already heard about the things you can do as an individual or a household to reduce your carbon: drive an electric car or take transit, avoid flying, avoid meat, change to LED lightbulbs, set your thermostat to use less heat and air conditioning—and those are all great, but if we need to decarbonize, we need societal change. Our province shutting down all the coal-fired power plants was, at the time, the largest climate mitigation project in North American history, because at a stroke we all emitted less carbon in our electricity regardless of our personal choices.

We need a lot more of that, which means action from all levels of government and business and industry leaders. Which isn’t going to happen unless they hear from a lot of us.

Which is where our lovely banners come in, and the school strikes and demonstrations. It’s amazing to me that even the conservative party has a climate policy for this year’s election. It’s crap, and it would make emissions go up, but they’ve got one–they’ve conceded that it’s real and accept that the public wants to see action. This is a direct result of increasing public visibility and pressure from things like the youth strikes. So the best thing for all of us to do is get more involved. 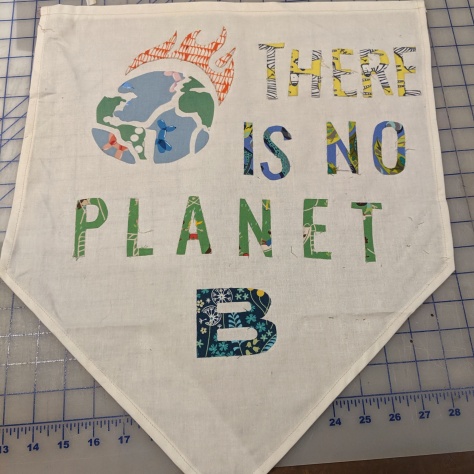 You weren’t at the workshop, you aren’t going to a strike: how else can you be part of mobilizing and publicly supporting action on climate change?

It is uncomfortable and new territory for a lot of us, but so much is at stake.  Please find a way to be involved!

For the climate nerds, here’s the theoretical background: climate communications research shows that conversations about the climate emergency are more successful and lead to better outcomes when:

1. They are in small groups or one-to-one, rather than mass communications
2. They come from a trusted member of that community, rather than from an outsider
3. They are built on shared values and priorities
4. They tackle solutions and a vision of a desired and desirable future

These workshops put that theory into practice in the Hamilton sewing community.

dispatches from the Greater Toronto Bioregion

When the lap is occupied by homework, try the back.

Single mom after divorcing a sex addict, learning how to make new mistakes.

"A life of pleasure makes even the strongest mind frivolous at last." -- Edward Bulwer-Lytton

Mahasti - The Bellydance Emporium - Bellydance in the heart of Hamilton, Ontario

Bellydance classes, events & parties in Hamilton "Let the beauty we love be what we do"

presents 'What is a Woman'...because it's absurd to be a woman on planet earth, etc.

Nice dress! Thanks, I made it!!

Addicted to sewing since the 70’s – Sewing Blogger since 2013 – Enjoying a #RTWFAST and Creator of #DESIGNINDECEMBER since 2015 – Designing Handbags and Accessories and PDF Sewing Patterns for bags and accessories at #LANYOSHANDMADE since 2018 – Lover of vegan, sustainable, repurposed and up-cycled projects – I want to try everything, learn everything and talk about it with you!

TIME TO REGISTER TO VOTE

Thank you for sewing with us...

turning the knots into something beautiful

Be a Climate Change Champion!